Hurried letters are no substitute for consultation

After a two year wait but in the space of just 12 hours, on 5 and 6 May 2015 some residents who would be affected by a development on the Conquest Club site received two letters. One was from Mary McCleod, Conservative parliamentary candidate, and the other was from Dr B S Mahon, Chairman, of the Nishkam Free School School Trust.  Both letters sought in different ways to respond to increasingly vocal concerns about the mooted development (I cannot even say “proposed” since it has not yet been properly proposed).

Mary McCleod’s says that she asked the free school for details about the proposed development on the Conquest site. The school told her that “The Conquest Club site was included as a possible site for a school in the original free school application submitted [to the Education Funding Agency] by the Nishkam School Trust.”

The school does not say on what basis this site of Metropolitan Open Space was included.  Mary McCleod sheds no light on the issue either eventhough she wrote in September 2013, “I’ve been actively supporting them throughout the process.”  See  http://www.huffingtonpost.co.uk/mary-macleod/free-schools-education_b_3879081.html .

The school also told Mary McCleod that the Educational Funding Agency chose the site from a short list of five and bought it.  Again we are given no information about the the basis for either the shortlist or the final selection.  Does the EFA buy property without the local authority agreeing that a site is suitable for educational development?  We are still in the dark.

Here is Mary McCleod’s letter (left-click on the images to see an enlarged view).

The letter from Dr Mahon seeks to assure residents that everything will be done to avoid disturbing them in any way.  Interestingly it assumes that the site will be approved for use for an educational building even though it does not appear in the Council’s forward planning list of possible sites. Here is the letter (left-click on the images for an enlarged view). 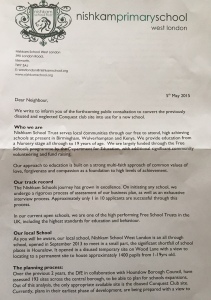 Clearly residents will have a lot of further questions arising from these letters. I would be very interested to hear their thoughts on the matter. If they want their views to be represented it may well be that they are going to need to be prepared to organise themselves ready for a rapid reaction to fast moving events. Watch this space.